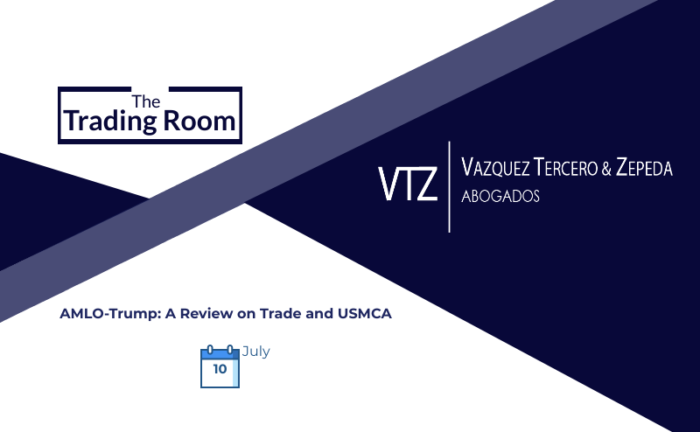 In what was a highly expected meeting regarding the celebration of USMCA’s entry into force, AMLO and Trump held a bilateral meeting and had a “trade-dinner” with numerous executives from the US and Mexico. We highlight the following matters during Wednesday’s event:

Joint Declaration Between the US and Mexico

Although the dinner was closed to the media, an attendee, Patricia Armendáriz CEO of Financiera Sustentable, tweeted what was going on during the dinner. In her tweets, she quotes speakers. For instance, AMLO mentioned that “[We] are in the best disposal to favor your investments in Mexico”.

Ms. Armendáriz tweeted that a representative of the US Steel industry expressed their intent to expand in Mexico.

Ms. Armendáriz also noted that a representative of the US dairy expressed their interest in Mexico as a result of the USMCA.

In a letter dated July 8, 2020, US house representatives issued a letter to AMLO, expressing their “serious” concerns regarding the implementation of the labor reform. We highlight the following statements:

The letter makes other somewhat specific statements, for instance, regarding reports of illegal firings and protection unions signing new contracts for the workplace before employees are hired, as well as “obstruction” in collective bargaining agreements on behalf of employers and “protection unions”. These issues are the “core” of Annex 23-A in the USMCA, which may be subject to the facility-specific rapid response labor mechanism. Needless to say, the letter recognizes that COVID may have posed an obstacle to implementing the labor reform, which it has, and another issue Mexico is that the labor reform implementation was planned in several phases that would conclude in 2022.

Away from the political controversy regarding some statements or the visit, the trade-related matters that were publicly discussed had a strong “labor” footprint. Both heads of states highlighted USMCA’s labor provisions, and that such rules will benefit workers in both countries.

Having failed to visit Joe Biden, the Democratic candidate to US President, democrats may take a more aggressive “labor” stance against the Government of Mexico. From our perspective, it is clear that labor matters will continue to be one of the main themes in the US – Mexico trade relations, and the private sector must avoid denying labor rights recognized in Mexican Labor Law, just as we stressed in our Labor & Trade webinars.

What also caught our attention is how AMLO welcomes investment in the light of the USMCA, but his administration has made “controversial” investment decisions regarding, for instance, energy policies.

We are also curious as to what the US steel industry might have meant regarding “expanding” in Mexico. Steel products are constantly targeted in trade remedy matters in Mexico. As for the dairy industry, we recall that Mexico recently introduces some technical standards or Official Standards on powder milk, cheese, and yogurt.

USMCA & VTZ in the news

The day arrived and USMCA has finally replaced NAFTA on July 1st, 2020. USMCA modernizes trade and investment rules and, thus, seeks to promote economic development in the region. Given that USMCA is attracting the media, a prestigious Mexican news outlet, Reforma, has interviewed and quoted Adrian Vázquez, VTZ managing partner, regarding USMCA’s entry into force and the Labor Chapter.

On the day USMCA entered into force, July 1st, 2020, Adrian Vázquez was quoted in an article regarding the rule of law. Mexican attorneys have expressed that Mexico must uphold the rule of law established in the USMCA provisions to reap its benefits. Our managing partner emphasized that Mexico must have the will to respect the rule of law established in the USMCA, and he expressed that the private sector also plays an important role since it must demand compliance of trade and investment provisions.

On July 6,  2020, Adrian Vázquez was quoted in an article of Reforma on the labor dispute settlement mechanisms in the USMCA, particularly regarding “anonymous witnesses”.

Our managing partner expressed that “[I]f this tool is used by American unions in order to submit an anonymous testimony, sending any person as a witness,  that is a danger and not whether if they are or not anonymous.”