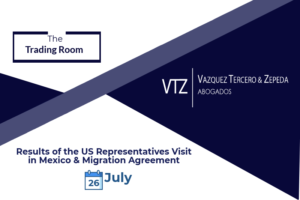 Results of the US Representatives Visit in Mexico

As reported in our previous edition, a delegation of representatives of the US Congress visited Mexican authorities last Friday in order to discuss concerns regarding USMCA. After the meetings a press conference was held in the afternoon.

As reported by a Mexican news outlet, the intention of the US representatives was not to “reopen” the agreement for a renegotiation and they informed that there is no instruction to not approve it; another news outlet, informs that Representative Blumenauer, President of the Committee on Ways and Means, did mention that the agreement may be improved without a major “reopening” of the agreement.

In sum, there is an interest in making the text of the agreement more effective, a clear reference to the panel blocking issue in labor and environment disputes. In turn, Mr. Seade, Underminister for North American Affairs of the Ministry of Foreign Affairs, commented, among other things, that Mexico is not willing to reopen negotiations (particularly, if it is not in Mexico’s interests); further, he stated that it is possible that these concerns are “changes” in the “package”, and not in the treaty in itself, that can be solved or agreed through “rules of procedure”.

What is the Status on the Migration Agreement?

On July 21, the Minister of Foreign Affairs, Marcelo Ebrard and the US Secretary of State, Mike Pompeo, met in Mexico City. The meeting’s central topic was about the migration agreement.

News outlets report that the US recognized Mexico’s effort to curb the flow of Central American migrants to the US. It is estimated that the migration flow was reduced by 30% due to the presence of the National Guard in the borders. As a result, the US ruled out the possibility to negotiate that Mexico should become a “safe third country”; that is, Mexico should accept and admit migrants, instead of the US, because it is safe territory. In addition, the “success” of the migration strategy reduces the likelihood of the US to impose a 5% tariff on all Mexican products. The agreement will continue to be monitored for the next 45 days.