Trade Alert: End of Mexican Countermeasures Against US Products 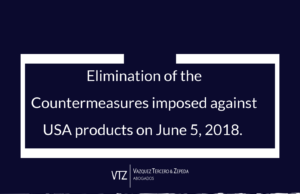 End of Mexican Countermeasures Against US Products

Last Friday a joint statement by the US and Mexico was issued regarding the elimination of the so-called Section 232 tariffs on Mexican steel and aluminum. On Sunday 19th, the US President issued a Proclamation that eliminated the 232 measures applicable to said Mexican imports.

Today, 20th of May, the President of Mexico issued the following Decree:

In today’s Decree, the Mexican President eliminates the countermeasures that were taken against goods originating from the US (Decree of June 5th, 2018), such as steel and aluminum products, pork meat, cheese, agricultural products, motor boats, fans, “bourbon whiskey”, lamps and metal furniture, among others. The Decree enters into force today, so said US products can again benefit from the preferential tariffs that were established in NAFTA.

As mentioned in the joint statement and the Proclamation, we note that the elimination of the 232 tariffs is accompanied by a series of measures that will aim “to prevent the importation of steel articles that are unfairly subsidized or sold at dumped prices, to prevent the transshipment of steel articles, and to monitor for and avoid import surges.” According to the joint statement, the US and Mexico “agreed” that tariffs may be imposed to an individual steel or aluminum product in the event that imports surge, and that the “exporting” country can only retaliate in the affected sector; this clearly limits Mexico’s possible retaliatory measures which proved to be effective. Finally, Mexico and the US agreed to terminate all WTO litigation regarding this matter.

III.Steel Products from Third Countries without an FTA

VTZ notes that in the Presidential Decree of June 5th, 2018, Mexico temporally raised tariffs against steel products from third countries with which it does not have a Free Trade Agreement. Such tariffs expired on January 31st, 2019. Mexico adopted said measure because it considered that it was likely a substantial increase in exports to Mexico, in part, because of the unilateral measures adopted by the US.

Notwithstanding that the aforementioned measures expired, again Mexico temporally raised tariffs on steel products from third countries on March 25th, 2019, claiming that there is an oversupply of steel. These “temporal” tariffs will be in force for 180 days, i.e. September 22, 2019.

Finally, VTZ highlights and considers that these events constitute a significant step towards the ratification process of USMCA in Mexico and the USA (as well as Canada). In this sense, companies established in the region shall start to prepare for its entry into force possibly in 2020. 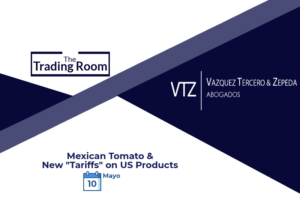 This Tuesday the Ministry of Economy issued a public statement regretting the decision of the Department of Commerce (DOC) regarding the termination of the Tomato Suspension Agreement, which was agreed by Mexican Exporters and renewed for the last time in 2013. This agreement a non-injurious export price was fixed.

The termination of the Agreement means that tomato exporters should pay/deposit a duty of 17.5% on the value when exporting tomato to the USA. Said percentage refers to the “dumping margin”, which was calculated provisionally in the antidumping investigation in the 90s. The DOC will continue to investigate and determine that the exports were made at less than fair value, the International Trade Commission will analyze whether the domestic industry was injured.

Notwithstanding, the parties will continue the negotiations for a new agreement. If it is reached, it will enter into force within 30 days and the provisional duties paid would be returned.

Last week, Mexican president, AMLO, and the Underminister of International Trade, Luz María de la Mora, announced respectively that the government is preparing new tariffs as countermeasures against agricultural, industrial and steel products from the USA. The countermeasures that are being prepared are an updated version of those imposed in response to the 232 measures against Mexican steel and aluminum. Mexico still has in force the countermeasures against certain products of US, steel, aluminum, pork meat, cheese, among others… will the new measures include temporal imports? 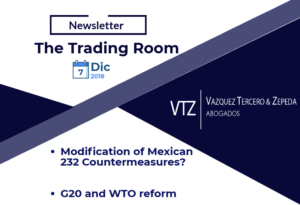 The new Mexican administration is considering to modify its countermeasures in response to the US 232 tariffs on Mexican aluminum and steel imports. In November, the Senate requested the Ministry of Economy to “mirror” the US 232 measures…See More 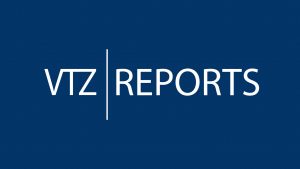 Today, the President of Mexico, Enrique Peña Nieto, issued two Decrees that adopted countermeasures against the United States (US) as a result of the US tariffs applied to aluminum and steel imports from Mexico. Most Mexican countermeasures come into effect today.

Mexico has adopted a strong position against the US, selecting a wide range of products from pork to steel products, which may be adjusted through time.

Mexico’s trade measures can be classified as follows: