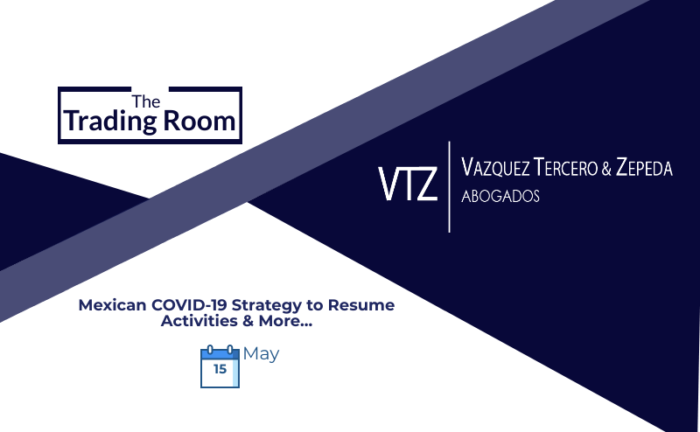 This week on the Trading Room, we address the Mexican the weekly news that impacts international trade in Mexico: Mexican COVID-19 strategy to resume activities, changes to the essential activities, Director General of the WTO steps down and its implications to Mexico, as well as the G20 decision. Download our newsletter in the following link: Trading Room – May 15.

After requests from the US government and industry, the Mexican Ministry of Health finally published yesterday the decision that adds as an “essential activities” the transportation equipment manufacturing industry, as well as the construction and mining; the decision also establishes a three-stage strategy to resume educational, social, and economic activities.

However, the three aforementioned industries will be able to resume activities until June 1, so supply chains will likely be affected, particularly OEM plants in the US that will begin operations the following week, as we reported last week citing the MENA.

For more information on the stages, we prepared an Alert – COVID.

We consider it important to share that the General Health Council published a similar decision on Wednesday, May 13, however, it was suddenly and incredibly withdrawn during the day by the Official Gazette of the Federation. The department issued a statement with an explanation.

A retired supreme court judge, Mr. Cossío, stated in a tweet that the alteration of the Official Gazette was done because public officials realized that the General Health Council lacked powers to issue such a decision.

The Mexican Bar issued a statement regarding this event calling the government to protect the trustworthiness of the Official Gazette.

In VTZ we fully endorse the content of the letter.

Yesterday, May 14, Roberto Azevedo, Director General (DG) of the WTO, announced that he will step down from his position on August 31 of this year. Roberto Azevedo began his position in 2013, a mandate that was renewed in 2017, and that ended in August 2021.

Within his mandate, the Commercial Facilitation Agreement, the expansion of the Information Technology Agreement, among other decisions, were agreed; Also, Azevedo has been criticized for being passive in defending the multilateral trading system due to the constant attacks of the US against the Appellate Body (including on a budgetary basis).

According to his farewell speech, Azevedo explains that he is resigning because, in part, members will be able to choose a new director who will have the time to prepare for the next Ministerial Conference as well as to set a new path for the future of the WTO, taking into account the new post-COVID-19 realities.

What implications are there for Mexico?

The WTO is going through a critical time, as no consensus has been reached, notably, with regard to the selection of Appellate Body members. Without a leader at the head of the WTO, the multilateral system will be paralyzed because members will hardly be able to reach new agreements to renew the foundations of the WTO, such as new agreements on subsidies, dispute settlement, fishery subsidies, etc.

Lighthizer, the US Trade Representative, stated that he looks forward to participating in the selection of the new DG; however, if the members do not manage to choose promptly, the trade uncertainty will continue because it will be difficult to reduce the tensions of the US-China trade war, to return the “Rule of Law” to international trade relations punishing unilateral-protectionist actions, as well as to face the post-COVID effects.

The regional blocs will continue to take on greater relevance in international trade, fragmenting and rendering the multilateral system obsolete. Although Mexico is a strong supporter of the multilateral system, Mexico has established itself in various regional blocs, notably USMCA (with a renewed dispute settlement chapter), CPTPP, Pacific Alliance, and now modernizing its trade relations with the European Union, which may allow Mexico to become an attraction pole for new regional and global value chains.

On May 14, the Ministry of Economy reported that the Trade and Investment Ministers of the G20 agreed on a series of specific actions in the short and long term to counter the economic effects of the COVID-19 pandemic.

The actions foreseen in the short term focus mainly on issues of trade regulation and facilitation, global value chains, strengthening of foreign investment, transparency, and operation of logistics channels. In the long term, members agreed to strengthen the multilateral trading system.

Finally, the Ministry of Economy’s statement indicates that the G20 Trade and Investment Working Group must report the status of implementation of the agreed actions.