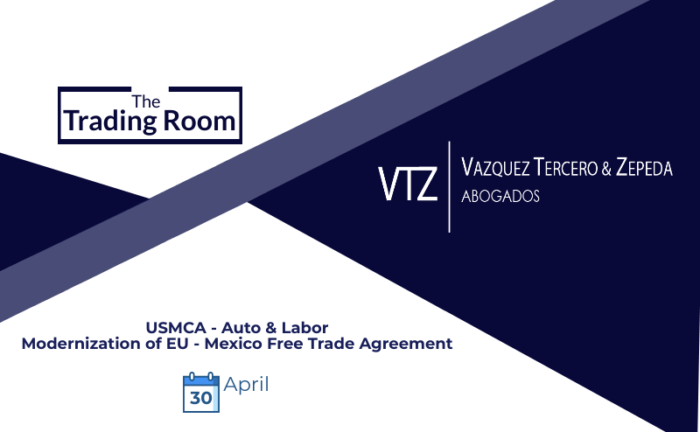 This week in our newsletter, The Trading Room, we address developments regarding the entry into force of USMCA as well as the modernization of the EU-Mexico Free Trade Agreement. Download our newsletter in PDF on the following link: Trading Room -30042020

Last Friday the US Government notified the US Congress that Mexico and Canada “have taken measures necessary to comply with their commitments under [USMCA]”; Mexico is still in the process of modifying legislation. After notification to its congress, the USA notified Mexico and Canada and, therefore, USMCA will enter into force on July 1, according to the rules established in said treaty.

In an interview, Undersecretary of International Trade, Luz María de la Mora, indicated that the governments of the three countries are working to define the Uniform Regulations, including those relating to Vehicles and Autoparts. The goal is that these regulations should be published by July 1.

However, the Undersecretary also commented that producers of passenger vehicles and light trucks have the possibility of requesting an alternative staging regime to comply with the respective rules of origin. Accordingly, this possibility reduces the “urgency” of finalizing said Uniform Regulations.

As a general rule, USMCA foresees a 3-year transition regime for said vehicles (e.g. VCR 66% to 75%); however, the appendix to Annex 4-B of USMCA foresees the possibility of an “alternative staging regime” to extend the transition for up to 5 years. Producers must justify their request and, if authorized, producers could benefit from a prolonged and gradual transition from Regional Content Value (including essential components), steel and aluminum content, and Labor Content Value.

It should be noted that if the proposal is accepted by the Ministry of Economy, the alternative staging regime will be applicable to the producer’s eligibility to use the regime for imports into Mexico.

On Tuesday, April 28, the  Interagency Labor Committee for Monitoring and Enforcement was established by executive order. This Committee is not provided in the USMCA, rather it is an internal body of the USA whose creation was ordered in Section 711 of the USMCA Implementation Act. The committee will be chaired by the US Trade Representative (USTR) and the Department of Labor and other agencies will be members.

The Interagency Labor Committee will monitor compliance with the labor commitments assumed by Mexico and Canada, the implementation of the labor reform in Mexico, and to request enforcement actions concerning a USMCA country that is not in compliance.

This Wednesday, April 29, and after four years of negotiations, the Ministry of Economy announced the end of the negotiations with the European Union on the modernization of the EUMEX-FTA.

The chapter that prevented the conclusion of the negotiations was the Public Procurement Chapter because the European Union had the interest of having access to tenders at the sub-federal (or state) level. Apparently, the result of the negotiations is to incorporate 17 Mexican states that are committed to international best practices. This is the first time that Mexico has negotiated public procurement at the sub-federal level in its history.

Now, the pending steps for the entry into force of this agreement are the legal review, translation, signature and the domestic approval process, i.e. the European bloc (European Parliament) as well as the legislative branch of each EU members because an investment chapter was included in the agreement, and, on the other hand, the Mexican Senate.