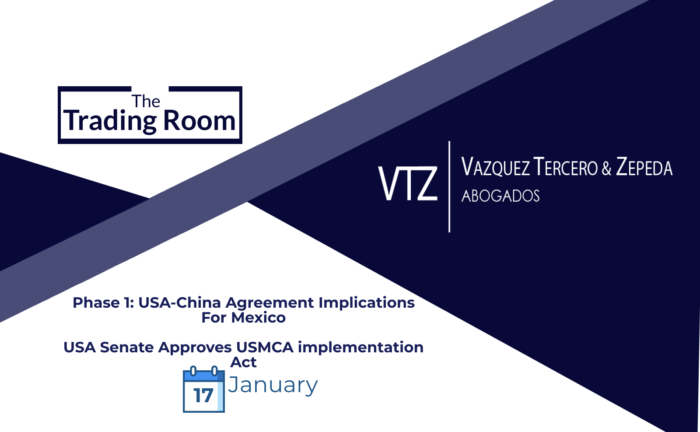 This Wednesday, January 15, China and the US signed the Phase One of the Trade Agreement after more than 18 months of tariff conflict. This Agreement specifies some structural changes in China’s economy and trade in issues such as intellectual property, technology transfers, agriculture, financial services, and currency. In spite of this week’s optimistic reactions, the reality is that 20% tariffs are maintained and that tangible results will not be seen in the short term, mainly due to the challenging implementation in China of the intellectual property and technology transfer agreements at the provincial and local level.

China is one of the main destinations for Mexican exports, hence, the obligated question is:

What will be the short-term impact of this Agreement for México?

One of the main concerns for analysts is that in the following months Chinese authorities will force companies to increase purchases of US products and services. Annex 6.1 “Increases in US Exports to China Over 2 Years” lists manufacturing goods such as machinery and automatic data processing units, internal combustion pistons, telephones and voice reception devices, passenger transport vehicles, among other products that Mexico successfully exports to that country. In agricultural products, the list includes frozen pork and beef, corn, sorghum, avocado, malt beer and fishmeal, some of the main Mexican agricultural exports to China.

On the other hand, it is expected that the technological rivalry between the two countries will continue to grow, mainly in the development of military and sensitive technologies, semiconductor production, and technological standards for 5G, Internet of Things (IoT), among other issues that were not resolved in the negotiations.

This Friday, the National Bureau of Statistics of China announced that GDP grew by 6.1% during 2019, the lowest growth rate reported for 29 years in the country. It is expected that the Chinese authorities will continue to implement policies that can maintain economic and market growth, and specifically those that drive the development of new technologies.

For all the above, in the coming months, it will be necessary for Mexico to redefine a strategic agenda with China that allows the country to further diversify its exports to the Chinese market, as well as strategically position itself in the current relocation of value chains that is happening as a consequence of the Chinese – US trade conflict.

Recall that VTZ has a Chinese Desk in Hong Kong.

Text of the agreement:

Yesterday, the US took a crucial step as the Senate approved the USMCA implementation act with 89  votes in favor and 10 votes against. The remaining step is for the US President to sign the act in order to virtually complete the US domestic approval process. It is reported that there will be a signing ceremony next week.

This event provoked positive reactions in the Mexican politician and business community. The Mexican President, AMLO, claimed that the treaty “means trust in Mexico so that investments can arrive…”

Meanwhile, the Mexican Ministry of Economy and the Ministry of Foreign Affairs claims that USMCA positions Mexico as a trading partner with USA and Canada, and starts a new phase for investment and growth in the region.

Needless to say, Canada is pending to approve USMCA so that the agreement can enter into force. The Mexican Ministries trust that the Canadian parliament will soon ratify USMCA, which will return to hold sessions until January 27th.

Save the Date: The Mexican Ministry of Economy will be organizing a seminar on USMCA that will commence on February 12th that will be open to the public. More information will be announced in the following days.