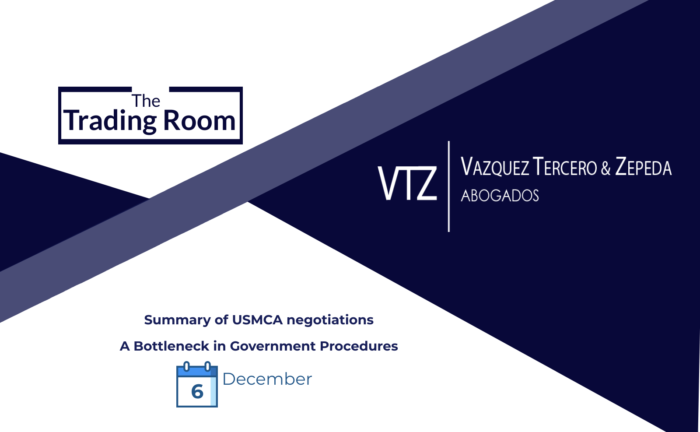 Last week the U.S. Trade Representative, Robert Lighthizer, delivered to Mexico the proposed amendments to USMCA, and the Mexican negotiator, Jesus Seade (Under-Minister of the Ministry of Foreign Affairs), had a meeting with him on Wednesday last week.

According to news outlets, the proposed amendments entail reducing the patent terms regarding biologic medicines, labor “enforcement” provisions, environment and dispute settlement, but apparently it also includes some changes to Rules of Origin. Last week, Mr. Seade stated that everything seemed going in the “correct direction”, Mexico approves the changes in general, some ideas or proposals are satisfactory, and that he had to study the proposals carefully.

This Wednesday Mr. Seade affirmed that it is possible that USMCA may be ratified in 2019. Also, he mentioned in an article that Mexico would not accept US inspectors to verify labor compliance that responded to an editorial of a journalist that criticized the current negotiations as if Mexico is accepting all US/Democrats demands.

In that sense, it must be noted that a former Mexican WTO Appellate Body member also criticized that Mr. Seade is acting “by himself”, without considering or involving the experience of the Ministry of Economy. The Ministry of Economy is the authority that should be in charge of coordinating the negotiations pursuant to Mexican Law.

Yesterday, Mr. Seade and Mr. Lighthizer held a meeting in Washington, and that there was no progress on the text according to the Mexican negotiator. At the same time, the Mexican Senate issued an agreement that authorizes certain committees to receive and draft documents as well as to approve decisions relating to USMCA.

Needless to say, USTR is proposing to tighten the rules of origin in steel and aluminum. The proposal, in essence, entails that virtually all the manufacturing process of steel and aluminum must be carried in the region. We are aware that the Mexican Industry, of course, considers such a proposal as unacceptable, since it would undermine the competitivity of the region as well as the possibility of Mexican companies to supply said products to automakers, among others. This proposal, however, may be a negotiation strategy to corner Mexico to accept a sort of mechanism to verify compliance of USMCA labor provisions.

A Bottleneck in Government Procedures related to International Trade

On Monday, it was reported in a Mexican news outlet that the decision to “centralize” government procedures in Mexico City has had as a result complicating international trade operation, such as exports to Europe and imports.

According to the vice-president of a Mexican Industry Chamber, CANACINTRA, the Ministry of Economy and the Mexican Sanitary Authority (COFEPRIS) are taking between two to three weeks for each procedure, while it previously took less than three days.

As previously reported, non-government bodies, like INDEX, may certify the origin of the goods that are exported, but only for the ALADI region. Meanwhile, exports to Europe, for instance, require a certificate of origin issued by the Ministry of Economy pursuant to the Free Trade Agreement (FTA). In the update of the Mexico-EU FTA, there will be changes in this matter, whereby a “registered” exporter may issue a statement of origin in order for its products to benefit from the tariff preferences.