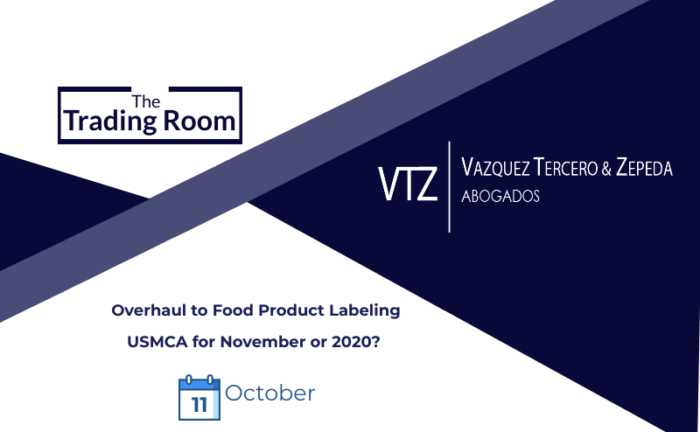 As we reported in our Alert, on October 1 the Chamber of Deputies approved the reform to the General Health Law to regulate the frontal warning labeling on food and non-alcoholic beverages. The Senate has yet to approve such reform.

In line with this reform, today was published in the Official Gazette the project of the amendment to “NOM-051”, a legal document that regulates labeling for food and non-alcoholic beverages. This amendment project introduces the new rules that will transform the food labeling system in Mexico, introducing “warning” designs and the “nutritional” limits to determine if a given warning applies, among other issues.

Companies and chambers of the food and beverage industry will have the opportunity to submit comments to the project that modifies the “NOM-051” within 60 days.

VTZ prepared a detailed alert in Spanish that summarizes the project of the amendment to “NOM-051”. The English version will be available as soon as possible.

Should you wish more information regarding the General Health Law reform,  the project of the amendment to NOM-051 or the process to submit comments, do not hesitate to contact a VTZ member.

This week a group of US congressmen met with the President of Mexico, AMLO, to discuss progress in the implementation of the labor reform.

Congressman Richard Neal expressed interest in seeing Mexico meet the labor standards required by TMEC. However, the congressman also expressed to Mexican officials their concern about the “amparos” (a constitutional remedy) promoted by unions against the labor reform. In response to this concern, they were informed that the Mexican government is “winning” these cases.

Richard Trumka, leader of one of the most important unions in North America AFL-CIO, threatened in an interview with The Washington Post that TMEC would not be approved if it is submitted for a vote before “Thanksgiving.”

AFL-CIO’s support is considered crucial to persuade Democrats to support the USMCA. Trumka emphasizes that a budgetary commitment by Mexico is required to ensure the correct implementation of the labor reform since there is a fear of Mexico’s ability to make the reform effective, he concludes saying that “If [Mexico] can’t apply their own laws, we have a real problem.”